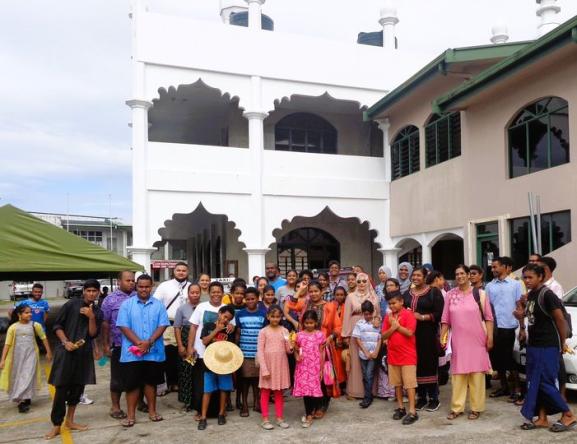 About 60 mostly young people gathered at the Lakeba St Muslim mosque before 10.00 a.m. on Saturday 16 July 2022. Our IRD pilgrimage began here as the maulvi explained and his assistant demonstrated how Muslims wash themselves before entering the mosque by leading with the right foot. Inside we lined up as Muslims do, shoulder to shoulder, while the maulvi explained some of the beliefs and worship practices of Islam.

From the mosque we followed Moala Street and entered the Samabula Gurudwara, pausing to read the rules of conduct inside the gate. We all donned head scarfs and sat among the Sikhs who were gathered there for a program. The Sikh priest played the harmonium, sang hymns in Punjabi language and explained Sikh teaching in English about the respect due to water, earth and environment. After about half an hour we departed for Gyan Mandir walking along Ono Street.

We sat in the mandir while a trustee, Dr Lal, and the vice-president, Mr Prasad, explained so of the Hindu beliefs and practices. Hindus believe in many gods and also in one God. Different days are dedicated to different deities. Hindus have many scriptures but Tulsi Dass’ Ramayan is the most popular one in Fiji. The statues of the gods were named and questions of pilgrims were answered.

We then proceeded to Helsen Street and entered the LDS chapel at the side of the LDS Primary school where Elder Whippy welcomed us. We watched a video of the Rome LDS Temple and had our questions answered. We heard about the LDS practice of being baptized on behalf of dead relatives and we noted the emphasis on family.

Our pilgrimage ended at St Joseph the Worker Parish, Lakeba Street where Fr Frank Hoare explained the two major beliefs of Catholic Christians contained in the sign of the cross – Jesus Christ’s saving death on the cross and His revelation that God is trinity i.e. three in one. He also explained the significance of the altar, the baptismal font, the tabernacle, the statues and how the color of the vestments used by the priest changes with the religious season of the year.

The pilgrimage ended at 3.00 p.m. We pilgrims were inspired by the variety of ways in which we humans seek God and God’s will for us. The pilgrims were tired from the standing and walking but no one was hungry as we had experienced marvelous hospitality along the way especially in Gyan Mandir where we were treated to a delicious vegetarian meal. We thank the religious leaders who welcomed and enlightened us and Ms. Priscilla Magdalin for organizing this memorable pilgrimage.