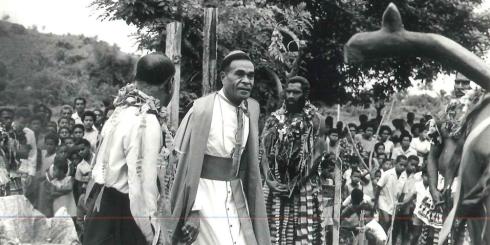 The people of Nabutautau believed that a curse was preventing their progress because their ancestors killed and ate Methodist missionary Rev. Baker. They invited Archbishop Mataca to come to their village to exorcise the evil. The Archbishop decided to walk in pilgrimage from Vanuakula Parish (where Fr John Mahoney was the parish priest) to Bemana (where Fr Chanel Cyr was parish priest). Fr Tom Rouse and I were just finishing our Fijian language course and we were delighted to go along too.

We set out from Vanuakula with about 50 catechists crossing and re-crossing the Wainimala River over 50 times. In one of the villages near the headwaters the old catechist was preventing the young trained catechist from making any changes. Archbishop Mataca thanked him for his service with a tabua (whale’s tooth) and officially retired him. However when we sat down to eat, the old man straightened up and began, “E na yaca ni Kalou….” (In the name of the Father….).

We two young priests suffered on the climb up the mountain track to reach the Nadrau plateau but the Archbishop and the older priests seemed to glide barefooted along. We camped on the plateau under banana leaf shelters. A few catechists caught a large eel which they roasted with the dalo (root crops) they had brought. I slipped fully clothed into my sleeping bag but hardly got a wink of sleep because of the cold.

Descending the mountain was harder than climbing it. Our knees and thighs were paining from constantly braking our descent. We rested at Nasauvakarua village and then reached Nabatautau where we were met by a couple of hundred people who arrived by road from the Western side. After the welcoming rituals we assisted at a solemn Mass and blessing of the village. Once dinner was over, a large group sat drinking yaqona under the moon and the stars as Fr Jim Johnston regaled us with his funny stories. Today we left for Namoli and the confirmation in Draubuta village.

But that’s a story for another day.