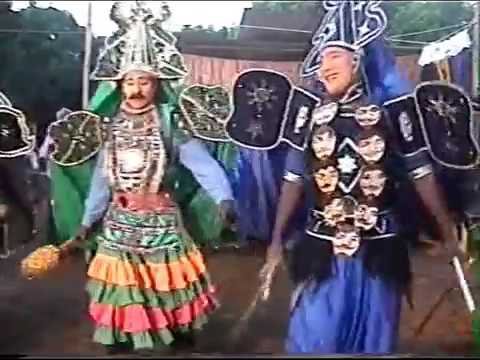 Our committee president in Naleba was very interested in Tirikuttu. It is a South Indian dance drama – a form of ritual and social entertainment and a medium of social instruction. The actors wear very colorful costumes. It usually tells a story in song from the Mahabharat Hindu scriptures, often focused on Draupadi, wife of the Pandava brothers. It is performed in an open space with the audience sitting or standing on three sides while the all male actors perform in front of the musicians and chorus. A prayer is said to Ganesh, the elephant god and remover of obstacles, at the beginning of a performance.

Our committee president used participate. He was one of the teachers or directors of the dance drama. Our committee secretary had strong objections. He said to me that it was scandalous that a Catholic would take part in a Hindu performance. I asked the president about it. He said that for him it was just a pastime and fun. I wasn’t sure if there were other issues involved. Since I didn’t know enough about it I made no pronouncements.

Some months later I was surprised early one Sunday morning to see the president and another Catholic man arrive at the church a couple of hours before Mass was to begin. They asked my permission to say their prayers and go home to sleep because they were tired from dancing the Tirikuttu all night. I said that I hadn’t made the Church law of attending Mass on Sunday so I couldn’t give permission to miss it. They would have to make their own decision according to their conscience. They murmured sadly to each other but they were still there when I began Mass a couple of hours later.

They were two tired men trudging home after Mass. But it was their own fault. Why did they ask me!