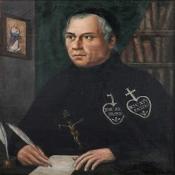 Dominic Barberi was born in Viterbo, Italy on June 22, 1792. At 22 years of age, after repeated heavenly inspirations, God called him to the religious life and ministry. He left farming work, abandoned all other plans for his future, and entered the Passionist Congregation. There he developed his extraordinary qualities of mind and heart.

Ordained priest, he devoted himself to teaching, to the ministry of the word, to spiritual direction and the composition of numerous writings of philosophical, theological, pastoral and ascetic nature.

In 1840, he established the first Passionist community outside of Italy in Ere, Belgium. He subsequently went to England where in 1842 he inaugurated the monastery of Aston Hall, near Stone.

Blessed Dominic consecrated and offered his life for the unity of the Church - the mission to which he had been called by God and to which he devoted himself with great love and with many initiatives from the time of his youth.

He longed for the return of the 'separated brethren' to the Catholic Church - an expression coined by him.

He made a heroic vow to renounce all material and spiritual consolation and offered himself to the Lord for the conversion of England. He anticipated by 150 years the ecumenical movement based on love, dialogue, respect for conscience and mutual discernment.

His interpersonal relations were intellectually profound, doctrinally impeccable and humanly friendly, respectful and caring, i.e. a rapport that is Christian and consequently, fruitful. Through him, the Anglican breathed the fresh air of a new springtime.

Through his works many Anglicans, including distinguished individuals, returned to the Catholic Church. Blessed Dominic received the profession of faith of the future Cardinal and now Blessed John Henry Newman, esteemed by all as "the Pope of the Protestants, their great spokesman, one of the most learned men of England". Newman admired Blessed Dominic as a simple and inspiring priest, learned and holy. He stated that he was Dominic's "convert and penitent".

Dominic died in Reading, near London, England on August 27, 1849. His grave in Sutton, St. Helens, England has become a place of pilgrimage for the English people. Pope Paul VI declared him "Blessed" on October 27, 1963 during Vatican II offering him as an example of commitment to ecumenism and joyfully proclaiming him to be an Apostle of unity.

An artwork depicting the meeting between St John Henry Newman and Blessed Dominic Barberi by Michael Long was installed in 2020 in St Margaret Mary Church, Birmingham, UK in the Newman Gallery. See a film by Dominic Ellis here:

and another film here: www.youtube.com/watch?v=1fPtuqnQ0Zs&feature=youtu.be 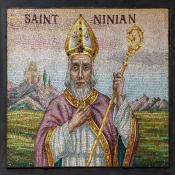 A 5th century British bishop and apostle in Whithorn and Galloway, St Ninian is traditionally also known as the 'Apostle of the Picts.'

A number of inscribed Christian stones have been discovered by archeologists around Galloway, which indicate that St Ninian lived there. Bede refers to him living at a monastery in the area near a church painted white. An anonymous 8th century poet wrote about him and the 12th century Ailred of Rievaulx wrote a life of this Scottish saint.

His shrine was a popular pilgrimage place for centuries, surviving up to the Reformation. By that time his cult had also spread to Kent and Denmark. In recent years pilgrims have again begun returning to Whithorn, and a special pilgrimage takes place on the last Sunday of August. Since 1984, excavations have revealed a site of major importance.