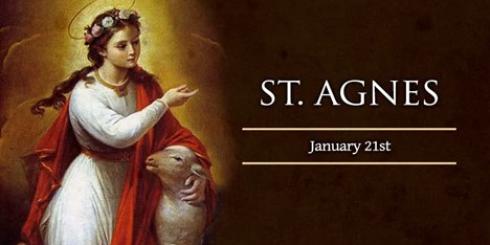 St. Agnes of Rome was born in 291 AD and raised in a Christian family. Agnes was very beautiful and belonged to a wealthy family. Her hand in marriage was highly sought after, and she had many high-ranking men chasing after her. However, Agnes made a promise to God never to stain her purity. Her love for the Lord was great and she hated sin even more than death!

Whenever a man wished to marry Agnes, she would always say, "Jesus Christ is my only Spouse."

Her feast day is celebrated on January 21. On her feast day, it is customary for two lambs to be brought in to be blessed by the pope. On Holy Thursday the lambs' wool is removed and woven into the pallium the pope gives to a newly consecrated archbishop as a sign of his power and union with the pope.