St Ignatius of Antioch and St John the Dwarf 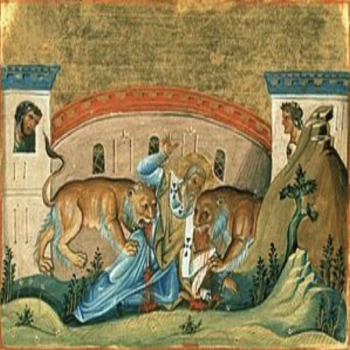 Bishop and martyr. Born in Syria, Ignatius converted to Christianity and eventually became bishop of Antioch. In the year 107, Emperor Trajan visited Antioch and forced the Christians there to choose between death and apostasy.

Ignatius would not deny his faith was condemned to be put to death in Rome. Ignatius is best known for the seven letters he wrote on the long journey from Antioch to Rome. Five of these letters are to Churches in Asia Minor; they urge the Christians there to remain faithful to God and to obey their superiors. He warns them against heretical doctrines, providing them with the solid truths of the Christian faith. To the church at Tralles he wrote: "I greet you from Smyrna together with the Churches of God present here with me. They comfort me in every way, both in body and in soul. My chains, which I carry about on me for Jesus Christ, begging that I may happily make my way to God, exhort you: persevere in your concord and in your community prayers." The sixth letter was to Polycarp, bishop of Smyrna, who was later martyred. The final letter begs the Christians in Rome not to try to stop his martyrdom. &quot;The only thing I ask of you is to allow me to offer the libation of my blood to God. I am the wheat of the Lord; may I be ground by the teeth of the beasts to become the immaculate bread of Christ." Ignatius was killed by lions in the Circus Maximus.

Hermit. St John lived sometime in the 5th century. As a young man, he went into the Egyptian desert to become a hermit. He believed that in order to achieve spiritual perfection he should pray constantly.

St John had a reputation for being very absent-minded. He was not interested in news of the outside world and had no sense of time. But he was greatly respected by his fellow monks for his holiness and wisdom. According to ancient texts, he helped train a former courtier, Arsenius, who became a monk, by treating him with near contempt. According to legend, while he was a novice, John was told to water a dead stick every day. He continued to do this for three years until one day it began to sprout leaves and bear fruit. Historians think it is likely this story was invented in monastic circles to illustrate the practice of obedience. St John died after fleeing a Berber invasion. His last words are said to have been: "I have never followed my own will, nor did I teach another what I did not first practice myself."